What follows is an essay from the Roots To Fruits Blog about red currants, which I wrote back in January. We are moving into fall and the red currant season is long past, although ideas for next year’s plantings are already brewing. It was a bountiful season for red, white, and pink currants. Find out more about the varieties growing in my garden below the following post:

” It’s the 18th of January — A breeze of solitude sweeps the air, the ground is blanketed in a sea of white, and as we begin to transition into the new year we get excited, ambitious, and creative. It’s easy to imagine spring just around the corner with all of Mother Nature’s magnificent beauties. Anticipating and planning the spring garden becomes an inevitable task. What new fruits,berries, or nuts will be added this year? Where will they go, and how will they fit into the larger garden ecosystem? One group of plants that comes to mind is the Ribes genus; This is an extensive genera but a few of it’s members that merit special attention are Black Currants, White Currants, Clove Currants,Gooseberries and what we will be highlighting today: Red Currants. American Red Currants (Ribes triste) and European Red Currants (Ribes rubrum) are both worthy of cultivation. Currants have been a longtime mainstay in much of Europe, and are finally regaining attention in America. Indigenous people of North America have been utilizing these amazing plants for millenia as both a food and medicine. As interest in new food plants continues to grow, so will the revival of not only Red Currants, but the entire Ribes genus.What follows is an informational video from last summer’s crop of Red Currants.

Other members of the Ribes genus including green/red gooseberries, white currants, and jostaberries– a cross between gooseberry and black currant.

Red Currants have a wide spectrum of uses all the way from fresh eating, to jams, jellies, marmalades, pies, fruit leathers and wines. They go wonderfully mixed with oatmeal or in ice cream. Each application has it’s pros and cons, but the amazing health benefits can be gained with each. For those who are unfamiliar with the unsurpassed flavor profile of the red currant, it can be described as having the perfect balance of sweetness and acidity with unique citrusy notes and a subtle musky undertone. Being very high in Vitamin C, they are a vital medicine for improving the health of the immune system. Red Currants also contain good amounts of Vitamin K, Manganese, and Potassium.

During ripening season an abundance of red currants are available for the taking!

Red Currants grow on a medium sizes shrub that reaches an average size of 4-5′ X 4-5′. Plants are hardy down to Zone 3. Over time they have a tendency to spread by burying branches and rooting where they make soil contact, this process is known as layering. If encouraged, layering can be used as a surefire way to expand your currant planting. The ornamental presence of these compact bushes is perhaps one of their most respected attributes, because after all we must remember that beauty is an important garden function! Their dense foliage bares resemblance to that of a maple tree or high bush cranberry. In early spring their small inconspicuous white flowers appear in clusters, leading to a bountiful display of blueberry sized red berries that ripen throughout June and into July, differing from cultivar to cultivar. The variety ‘Johnkeer Van Tets’ is the earlist ripening. When glistening in the sunlight the berries look like translucent jewels dangling from the bush. They grow well in a variety of soils, but generally prefer soil that is slightly alkaline and well drained. Adding compost and wood ash around your plants will increase yields. Red Currants are one of the few plants that will bear fruit well in shade. Currants can be planted as single specimen plants or 2-3 feet apart to form an attractive hedge.

This espaliered red currant in garden writer Lee Reich’s garden appeals to the eyes and the taste buds, but he claims that the most difficult part is harvesting the berries and ruining the beautiful display! Photo courtesy http://www.leereich.com

Why You Should Grow Red Currants

Red currants are the ideal plant for the edible landscape or the permaculture garden. They are very low maintenance and yield prolifically for years upon years. The bulk of management is in harvesting, mulching, and perhaps providing an annual side dressing of compost. They present gardeners and farmers with the rare opportunity to grow food in even the shadiest of conditions. Besides providing a tasty and nutritious super food, they also posses potent medicinal qualities. All around Red Currants deserve a very high rating– we noticed this a few years ago and began propagating them in our nursery. We’re happy to offer these wonderful plants to the public; if you want to incorporate some Red Currant bushes into your landscape, then inquire for plant prices and availability at Terranu nursery llc!“

Wild red Currants growing in the understory of a mulberry tree, demonstrating their ability to thrive in the shade. What an excellent plant for the Edible Forest Garden!?

For the past 4 years I have been eating red currants and enjoying them to a great extent. I’ve harvested them from the wild and from the cultivated varieties (AKA cultivar) growing in my own garden. I will reiterate by saying that white and pink currants are variants of red currant and are the same species, R. rubrum. The flavor of white and pink currants is almost identical to red, maybe a little sweeter and less acid with some cultivars. I have all three in my garden. Currants contain high levels of citric and malic acid, making them very tart. Personally, I enjoy the energized feeling after indulging in a handful of fresh currants. Some only consume them cooked down with sugar. Red currants are very nutritious and medicinal. Now, onward with my experience growing these wonderful berries. 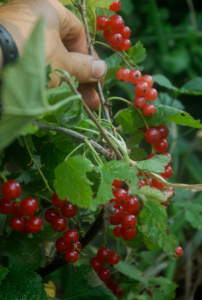 I’ve known for the past few years. Her yields are outstanding (no, currants are not dioecious!), and the flavor is rather mild compared to some of the cultivated varieties. The fruit size is small to medium depending on what you’re comparing to. But the special part about these berries, is that I (nor anyone else) did anything for them. They grow wild with no human inputs. Virtually care-free. This bush, which I’ve named ‘U-Pick’, is a generous giver and has never failed to impress me. The cultivar ‘Rovada’ lives happily in the planting bed that lines the sidewalk to our back door. ‘Rovada’ produces large berries, some up to twice the size of ‘U-Pick’ with a much sharper

tartness. From my experience, ‘Rovada’ does not fare well against aphids or leaf rollers—two common pests of red currants. My ‘Rovada’ bush was in nearly full shade and yields were not compromised. This

season I processed my Red Currants into low-sugar jam for winter enjoyment and popsicles for cooling off during the rest of the summer(July onward). Maybe next season I will try my hand at becoming an épépineuses! 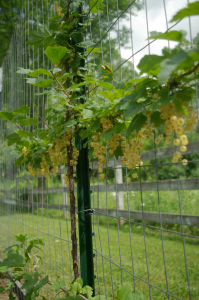 One thing that I’ve noticed about pink currants is that they ripen during an intermediate period between the white and red types. The white ripen the earliest, followed by pink, then red (from my limited observations). The cultivar that grows in my garden is called ‘Pink Champagne’, which was purchased from Stark Bro Nurseries. Although this variety is said to be pink, this was not the case in my garden where the berries barely turned pink; more like a white currant with the slightest hint of pink when dead ripe, so slight it was 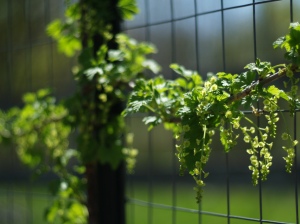 hardly noticeable. Perhaps it was being sold under the wrong name. If you want to grow pink currants, then try out the cultivar ‘Gloires des Sablons’ as well. I have trained my pink currant as an espalier along the garden fence. I was inspired by Lee Reich to utilize this space-saving training technique. Instead of being a 5’x5′ bush, it is trained similarly to a grapevine—occupying only vertical space.

White Currants have become very special to me, primarily because of their early ripening–

early-mid June in my garden. I’ve planted two cultivars, and so far ‘Primus’ has performed the best. Aside from its ornamental red-tinged foliage, It produces dense clusters of medium to large sized berries with excellent flavor(more sweet). Third year plants produced 3 quarts. ‘Primus’ is somewhat susceptible to aphid damage, and Marc Boone, former president of the MNGA informs me that his plant got damaged from frost in recent years. ‘Primus’ exhibits the favorable quality of ripening evenly, making harvesting at once more viable. This is especially good if you plan to process them for later use. Otherwise, uneven ripening may be favored for a

continual supply of fresh berries. The ladder of which you will find with the cultivar ‘White Imperial’, which ripens a few weeks before ‘Primus’. This cultivar did not have a single aphid on it’s leaf surface. Either the birds like to eat the berries or they drop prematurely because a lot went missing in my garden. Maybe they vaporized.

There is a chance White Imperial will be removed. ‘White Cherry’ is the other cultivar which I’ve planted. This variety came from the USDA, however I haven’t been able to properly evaluate it due to immaturity. Overall, I am very pleased with white currants.

Soon it will be time to start pruning the currants, and after that we will have a lot of hardwood cuttings for propagating. Currants are one of the EASIEST plants to propagate from cuttings and layering. A friend says ‘If you’ve taken currant cuttings and had a 95% success rate, then you’ve done something wrong!’. This statement vows for their ability to readily take root, even without a rooting hormone. Cuttings are an easy way to start your planting, especially if you know someone with mature plants. Take 6-10″ long, pencil width cuttings in late winter-early spring(when plants are still dormant), and place them in nice loose soil with at least 3 buds above the ground. To learn about different cultivars of red, white, and pink currants click here. Visit the Links page to find sources for purchasing currant bushes. I encourage you to comment and share your experiences with growing red, white, and pink currants. Happy gardening!