Today is special for two major reasons. It is a new moon and we’re receiving a much-needed steady rainfall… atlas bringing a halt to the desiccating drought. These rainy days are so pleasant; its a good time to be indoors and bring order to things within. I want to share some recent thoughts about caneberries, brambles, or to be more taxonomically correct— the Rubus genus. Being apart of the Rosaceae family the Rubus genus is a  widespread group of plants with species found growing on all continents. Rubus spp. have been used for food and medicine since ancient times and some very prominent fruits like blackberries and raspberries are members of this genera. Most folks are only familiar with black raspberries and the two previously mentioned, but there are many other interesting Rubus species worthy of examination and cultivation. There seems to be a term for just about everything… it turns out there’s even a term for the scientific study of members of the Rubus genus— batology. No, not the study of bats. In exploring batology you’ll find that the most commonly cultivated brambles come from a complex lineage… 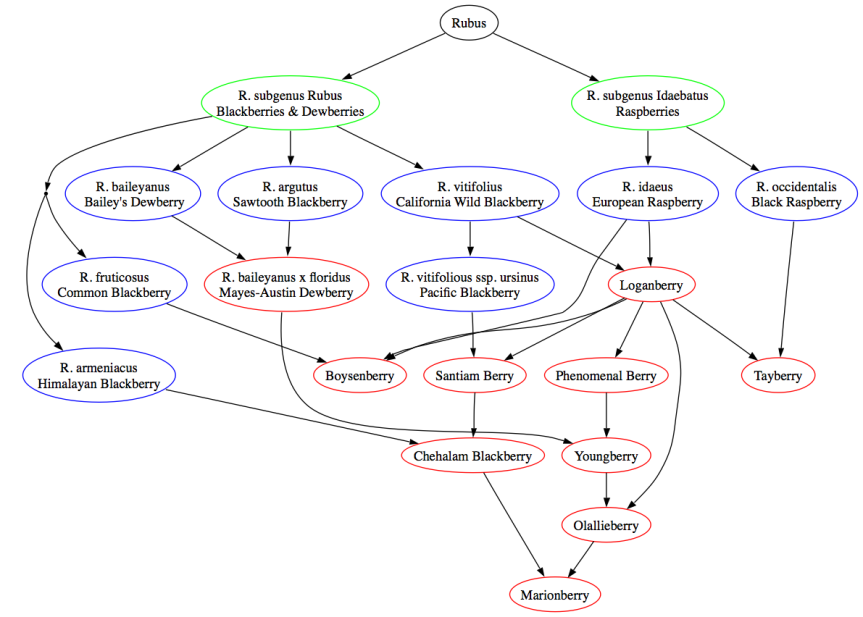 Rubus phoenicolasius, or Japanese wineberry, is a species native to Asia that has

naturalized in much of eastern North America. Wineberries are sought after fruits, which like most caneberries, are born on second year canes (floricanes). Apparently the canes can reach 3-6 feet in height and are notorious for spreading quite rampantly. Wineberries are regarded as ‘gourmet raspberries’ and can be processed into jams, jellies, and pies just like regular raspberries.  I’ve yet to try fresh wineberries, although last year my friend and colleague, Kevin Brennan, was kind enough to send me a jar of wineberry jelly. Kevin lives on the east coast and loves wineberries. Here is a post he wrote about them a while ago on his blog, The Suburban Trip. Kevin sent an email explaining wineberries and this is what he said:

“The best thing about wineberries is that they are just so abundant. The almost furry berry clusters contain up to 10 berries each and they are super easy to pick in large quantities. I once picked 2 gallons in 15 min. The wineberry produces fruit on 2 and 3 year canes and layers it self and creates large patches. Some spots I go to are in full shade and are still producing a ton a berries, I would really like to try to promote the growth of wineberries in wild gardens for selling to restaurants and farm stands because of the ease of picking. I would like to try saving seed from jelly making and then just throwing them out in slightly tilled areas, or even shitting the seeds like the birds to make patches.”

I love Kevin’s last statement about seed propagation. In fact, he sent me a bag full of seed last year, and I sowed the seeds earlier this spring after a few months of cool-moist stratification in the refrigerator. For a while they didn’t do anything and finally germination occurred. Voilà! No sparse germination either, these babies came up with fury. Now I am potting them up and eventually will plant out my own wineberry patch!

Another Rubus character of particular interest is R. ursinus × idaeus, or boysenberry. This is a complex hybrid which came about as a cross between European raspberry (R. idaeus), common blackberry (R. fruticosus), and loganberry (Rubus × loganobaccus). The hyrbid was originally developed during the late 1920’s in California by a farmer named

Rudolph Boysen. He abandoned his farm and years later the hybrid was found and named by two horticultural explorers and berry enthusiasts, George Darrow and Walter Knot. Now nearly 90 years later boysenberry plants are readily available in the nursery trade. I got my boysenberry from a nursery in Ohio and I’ve been growing it in a container. The plants are trailing and entirely non-erect, so they require a trellis if you intend to keep ’em off the ground. This year my plant has ripened a few handfuls of delicious berries which are best described as a combination of a blackberry and raspberry…with the tart blackberry flavor and more of the raspberry phenotype. Like all caneberries, boysenberries are an etaerio or aggregate fruit containing several drupelets. An aggregate fruit develops from the merging of numerous separate ovaries from one flower. On the contrary, a simple fruit, like a grape, develops from a single ovary.

Amongst the hundreds of caneberries some other obscure ones are thimbleberries, purple flowering raspberries, dewberries, and loganberries. I’d love to hear about your experience growing or harvesting these luscious drupes!